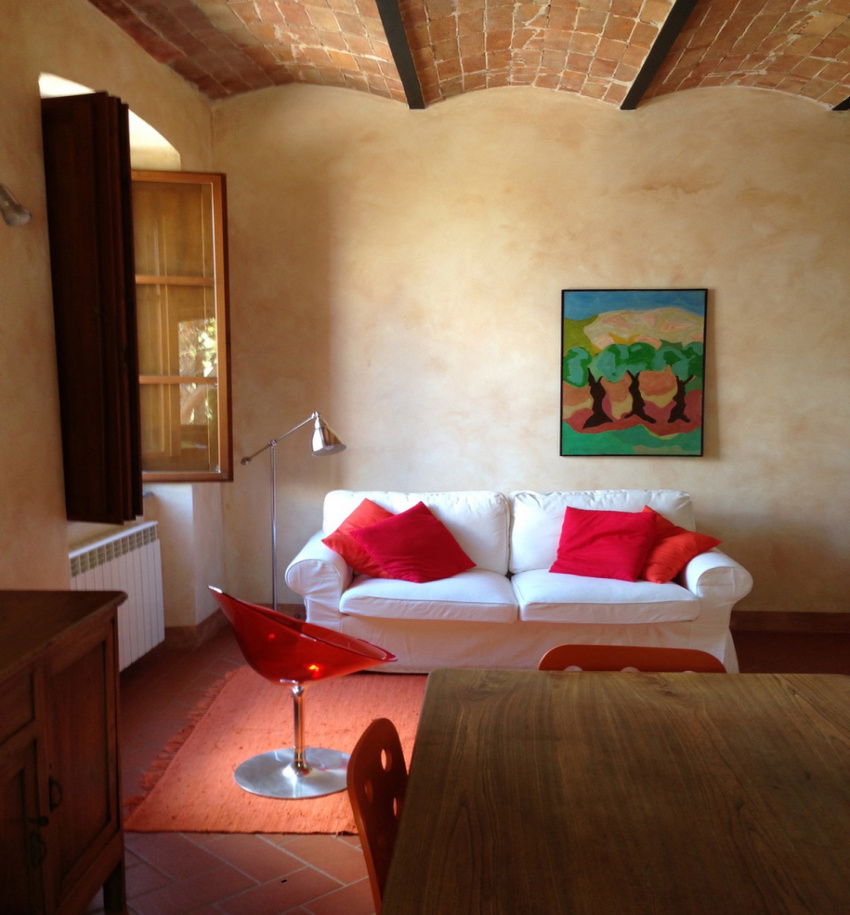 The apartment is on the corner of The Palazzo della Pieve on the second floor and has full use of the gorgeus large pool behind the house. The Palazzo was bilt in '600as a convent and subsequently used as a convent's horspital. It has obviously been fully renovated and restored after 2005 maintaning all original details therefore honoring all of its italian architectural charme.
Pieve di Santa Luce is a tiny village nestled into Pisanian hills, right between the hills of Livorno and the last offshoots of the Maremma Pisana and 40 minutes by car from the Pisa's International Airport.
It is located at a distance of Km 2,5 from the community of Santa Luce, a small ancient town, chelterd by a hill, which has preserved the authentic layout of the antique feudal hamlets. Walking down from Santa Luce towards Pieve di Santa Luce and the sea, one encounters the perfectly intact roman parish church and its beautiful bell tower standing out and reflecting the exceptional light of the hills.
The village is positioned at 152m above sea level and is 20 minutes by car from the famous coastal road Aurelia which will take you all the way to Rome, a goergous trip along the coastline, the Maremma Toscana. Other amazing destinations close by are Castiglioncello, at a 20 minute distance, Volterra at 30 and another 30 minutes to Bolgheri and Castagneto Carducci, linked by the famous "Strada del vino" which, along the way, gathers the most imporatnt Tuscan wines, also known as the "Super Tuscany", among which Sassicaia and Tignanello.
Another special place in the immediate vicinity of Pieve di Santa Luce, at Pomaia, are the headquarters of one of Europe's most imporatnt Buddhist Centers, The Institute Lama Tzong Khapa, founded in 1977.
Pieve di Santa Luce has all of 97 inhabitants who are extraordinarily hospitable and always ready to assist and it goes without saying that its many Trattoria's serve the most divine food.